Nox Defense has released an invisible perimeter defense technology, which combines high-resolution video pictures and RFID tags, sometimes referred to as “spy chips”, to track assets and people in real time. The system allows security officers to see a theft or intrusion as it happens, and track a stolen object even if concealed inside a briefcase, under a jacket, or stuffed inside a sock. The FBI is among early adopters of the Nox Intelligent Perimeter Defense system, though has not released details how it will use the system. 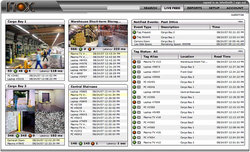 RFID is the technology behind access cards, security tags, and now passports. Nox differs from traditional security systems in using RFID for clandestine surveillance: RFID readers are hidden inside walls, floors, and ceilings; RFID tags are secretly and discretely placed; only the security personnel know the system is in place and personnel are tracked without their knowledge. A thief or intruder sees nothing. Nox provides no physical boundaries.

Traditional security systems are simply not proving effective against criminals. According to the American Management Association, employees at US companies steal over a billion dollars a week from their employers, which requires $20 billion in sales every week just to cover the losses. That is a yearly economic impact of $1 trillion.

One of the more covert Nox Defense technologies is ID-Dust, small RFID chips that are sprinkled on the floor. People pick up the ID-Dust on their shoes, which covert RFID readers track, triggering video surveillance and alerting security personnel on hand-held devices. The Nox software creates a complete history of exactly where the person travels and when, and combines a facility map with real-time video surveillance.

The RFID tags are custom to the NOX system. Asset tags are small, silent until activated (either via motion or external inputs), and secure; they use encrypted RF conversations and cannot be duplicated.