RSA Conference announced the recipients of its 11th annual awards program. Award applicants were judged in the fields of mathematics, public policy and security practices, and the honored recipient in each field was revealed on Monday, April 7, at RSA Conference 2008 in San Francisco. Additionally, Thomas Noonan, former general manager of IBM Internet Security Systems, was presented a lifetime achievement award on Wednesday, April 9. 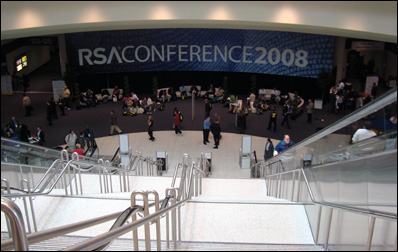 The recipients of this year’s RSA Conference Awards are as follows:

Thomas Noonan recently retired as general manager of IBM Internet Security Systems, and he is also the former chairman, president and chief executive officer of Internet Security Systems (ISS), which was acquired by IBM in 2006. Under Noonan’s leadership, ISS’ revenue soared from startup-status to nearly $330 million in its first decade, as he helped to pioneer intrusion detection technologies and made substantial contributions to the growth of the information security industry. A sought-after industry luminary, educator and spokesperson on information security, President Bush appointed Noonan in 2002 to serve on the National Infrastructure Advisory Council (NIAC). Noonan’s management style and vision have been widely recognized by the likes of BusinessWeek, Forbes and Fortune, and in 1999 Ernst & Young named him “Entrepreneur of the Year.”

Excellence in the Field of Mathematics

Professor Arjen Lenstra has made fundamental contributions to the design of integer factoring techniques, most notably the General Number Field Sieve (GNFS) – the most efficient classical algorithm known for factoring integers larger than 100 digits. He has been equally involved in the application of these tools, and a participant in a number of landmark factorizations of RSA moduli, such as RSA-155 (a 512-bit public key). Lenstra’s work has been essential to the computer security industry’s understanding of the strength of cryptographic systems, and instrumental in the selection and standardization of strong RSA key sizes.

Congressman Langevin is the chairman of the House of Representatives’ Homeland Security Subcommittee on Emerging Threats, Cybersecurity and Science and Technology. No congressional subcommittee was more active on cybersecurity in 2007 than Langevin’s – he held more hearings on the issue than any other member of congress in a single year. In addition, his Subcommittee’s work has helped to educate fellow members of Congress and the general public about emerging information security threats to government systems and our country’s critical infrastructure. With his strong commitment to raising the bar of our nation’s information security posture, Congressman Langevin has worked in a bi-partisan way to spur the U.S. government to devote more time to understanding information security risks and developing more effective strategies to mitigate them.

Excellence in the Field of Security Practices

At Goldman Sachs & Co., Philip Venables has simultaneously spearheaded several major security initiatives. One of his most significant endeavors has been to focus on protecting the information assets themselves. In today’s extended enterprises, security practitioners cannot rely on traditional perimeters anymore and must find new approaches to protecting data as it travels beyond the network firewalls. Through Venables’ pioneering efforts, Goldman Sachs has built a cutting-edge security infrastructure that is considered a competitive advantage. In addition, he is one of the first to successfully implement Enterprise Rights Management (ERM) as a core component of an information protection strategy. By having the security travel with the data itself, Goldman Sachs can better control access to critical documents within their global and mobile business environment.