Unlike using Windows or OS X, setting up a FreeBSD server isn’t push-button easy. One can’t just pop in the CD and run “setup,” and for good reason. Users need to make some difficult choices about what to install, depending on what they plan to build—whether it’s a mail, file, web, or network server. 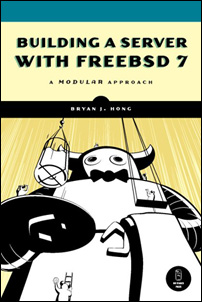 No Starch Press has released its eagerly awaited Building a Server with FreeBSD 7. This modular guide to building a FreeBSD server is carefully designed to make it easy for users to choose the packages that they need, with step-by-step directions for installation and configuration.

Hong’s straightforward style makes it easy for the do-it-yourself crowd to build a server quickly using the ports collection (a software package management system). But rather than wade through the thousands of ports available, Hong focuses on the most popular and useful ones. Each package is treated as an independent project (and given a difficulty rating), so readers can dip into the book at any point to install just the packages they need, when they need them. The book’s modules cover topics like:

Building a Server with FreeBSD 7 will have readers running their own server loaded with useful modules in no time, with a minimum of hassle.