Hitachi GST began shipment of its fourth-generation 7,200 RPM mobile hard drive, the Travelstar 7K320 which delivers 60% higher capacity than its predecessor, while improving application performance. The drive features optional Bulk Data Encryption (BDE), a capability that Hitachi has offered in its mobile hard drives since the start of 2007. Previously, data on a hard drive could be protected either through software-based encryption or a system-level password. Hard drive level encryption provides improved performance and a higher level of security than any of the previously available methods. 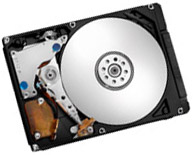 When employing bulk data encryption, data is scrambled using a key as it is being written to the disk and then descrambled with the key as it is retrieved. Thus, data encryption at the hard-drive level represents a more sophisticated approach of securing users’ data and is generally considered to be virtually impenetrable. Another benefit is that it speeds and simplifies the drive re-deployment process. By deleting the encryption key, the data on the drive is rendered unreadable, thereby eliminating the need for time-consuming data-overwrite.

The Travelstar 7K320 includes many features that translate into very tangible benefits for users, including: