Fujitsu announced the development of a new image-sensing technology that can thoroughly and accurately track – without blind spots – the motion paths of multiple individuals as they move while indoor. By employing ceiling-mounted multiple compact surveillance cameras to monitor designated areas, and enabling automatic and accurate extraction of the motion paths of individuals shown in images from those cameras, this technology has potential for practical use in a wide variety of applications, including surveillance of suspicious behavior, observation of consumer purchasing behavior as retail marketing, and task analysis as part of visualization of work efficiencies. 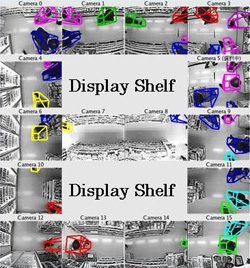 In the field of automated video monitoring, in which images are analyzed by computers, technologies already exist that can extract a person’s movement lines from video. These technologies are already used in the surveillance cameras seen in convenience stores, typically mounted near the ceiling and shooting at a diagonal angle. However, in such methods of surveillance, image processing is conducted separately for each camera, thereby resulting in such problems as the presence of a single individual that is accounted for multiple times by several cameras, or lead to blind spots caused when an individual is hidden behind another individual from certain cameras, making it difficult to accurately assess the number of individuals shown in images and extract each individual’s motion path from the images.

Key features of this technology: