Oki Electric Industry announced its launch of a face recognition middleware for the surveillance market. The “FSE (Face Sensing Engine) Ver.4” for embedded systems can detect faces and identify specific human beings from surveillance videos. OKI plans to offer an embedded video recognition module with a human tracking function shortly, and when this module is combined with the system, once the face is detected from the video, the system can continue to track that specific person through other features, even when his/her face is not seen on the camera. 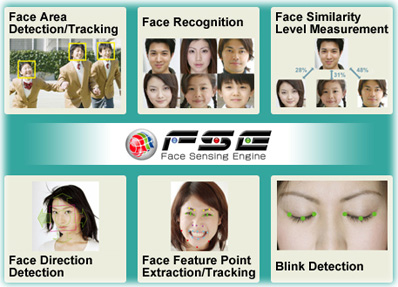 The newly launched FSE Ver. 4 will reduce the network load from surveillance systems, which has been a problem when large amounts of video data are sent. Instead of sending massive video data, the new approach can deliver parts of the video or transmit specific images over the network. By combining FSE Ver.4 with an object tracking function, a system can monitor the behavior of an identified person and with the addition of a digital video recorder, data capacity can be reduced while still enabling suspicious figures to be found in the recorded data.

Improvements are made in the following two areas:

Enhanced basic functions for the surveillance market – The FSE Ver.4 can now detect faces faster and capture faces from a broader range of angles to enable face detection from cameras that are mounted at ceiling level, for example. These improvements reduce the network load as the system can select only relevant videos or images to be transmitted over the network.