IBM today released results from its X-Force 2008 Midyear Trend Statistics report that indicates cyber-criminals are adopting new automation techniques and strategies that allow them to exploit vulnerabilities much faster than ever before. The new tools are being implemented on the Internet by organized criminal elements, and at the same time public exploit code published by researchers are putting more systems, databases and ultimately, people at risk of compromise.
Ã‚Â
According to the X-Force report, 94 percent of all browser-related online exploits occurred within 24 hours of official vulnerability disclosure. These attacks, known-as “zero-day” exploits, are on the Internet before people even know they have a vulnerability that needs to be patched in their systems.
Ã‚Â 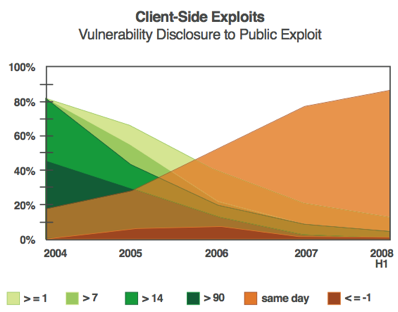 This phenomenon is being driven by sophisticated cyber-criminals’ adoption and evolution of automated tools for creating and delivering exploit tools, as well as the lack of a set protocol for disclosing vulnerabilities in the research industry. The practice of disclosing exploit code along with a security advisory has been the accepted practice for many security researchers. However, according to the X-Force report, vulnerabilities disclosed by independent researchers are twice as likely to have zero-day exploit code published, calling into question how researchers practice vulnerability disclosure and signifying the need for a new standard in the industry.
Ã‚Â
Key findings from the X-Force report include: