Sophos reported a new widespread wave of dangerous spam messages that claim to be breaking news alerts from MSNBC.Ã‚Â Samples intercepted at SophosLabs have revealed that rather than containing a link to the story on MSNBC, unsuspecting users that click on the URL in the email will be redirected to a malicious webpage which will then attempt to infect computers with a Trojan Horse. 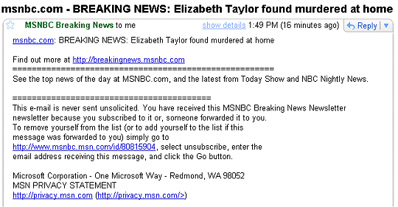 According to Sophos, the emails contain a variety of subject lines including:

The messages are the latest from the spam gang that recently distributed emails claiming to be from CNN’s breaking news alert service.