By integrating a flexible MAC with a Packet Pre-Processor and a programmable Traffic Manager at full-duplex rates of 80G, the P130 provides system vendors with the complete functionality requires for a carrier-class MAC aggregator. The P130 device enables system vendors to create various over-subscribed configurations that enable configuration from 2-to-1 up to 8-to-1. These can include combinations of multiple ports of 1GE and 10GE with future versions supporting 40GE and 100GE. The P130 pre-processor can be further used to offload packet processing from the system Network/Packet Processors. 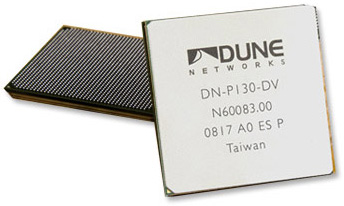 The PETRA P130 device supports a wide range of interfaces that can be dynamically allocated between the line side (towards the Phy) and the system side (towards NP/PP).

Each interface has the ability to run at its native speed or higher speeds, up to 6.25Gbps per lane. The devices feature a micro-code parser and mapping logic, enabling it to accommodate a wide range of packet formats. The Petra line is designed to interoperate with an array of Packet and Networks Processors, including Marvell, EZchip, Xelerated, and Bay Microsystems, in addition to proprietary PP solutions.