A major trend throughout 2008 that intensified during the third quarter is spammers’ increased use of cloaking techniques to hide their poor reputation behind someone else’s good reputation. This means that instead of sending email from a known spam IP address or – more commonly – from an infected bot server, spammers are finding new ways to send messages using valid or known mail servers, mainly webmail accounts, which have a reputation as a legitimate email source. Spammers have been forced to adopt these techniques due to the constantly improving filtering tactics used to thwart them.

These anti-spam tactics include:

These email blocking maneuvers make it much more difficult for spammers to penetrate their messages into organizations, and has forced them to come up with more creative infiltration methods, including hijacking good reputation to camouflage their own poor reputation.

There are several methods spammers use to hijack good reputation, in order to make use of it to deliver their unwanted mail:

Below is a sample email from an outbreak late in the third quarter that took advantage of Microsoft’s Live.com site to redirect to a spam casino site. 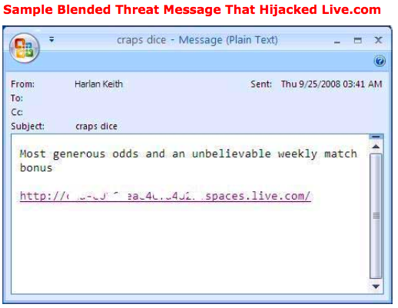 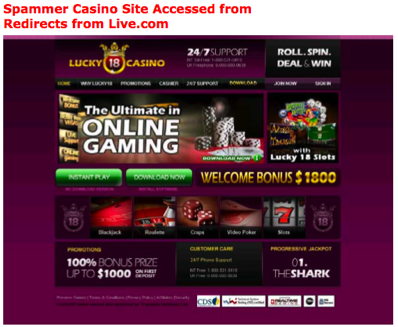