Malware authors haven’t been slow reacting to the latest US elections news and President Elect Barrack Obama is already being used as a lure for infecting unsuspecting internet users.

Here is a typical piece of spam that is being seen in Sophos spam traps around the world:

Were you to click on the link you would find yourself on a website pretending to be a news site offering information and a video of Barack Obama’s historic win. However, the site tries to fool you into installing what it claims is an update to Adobe Flash to view the video. 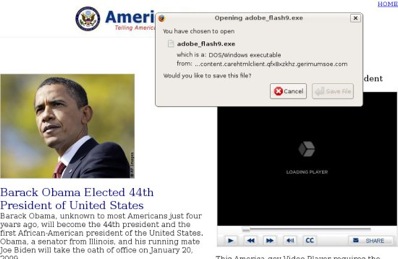 The file referenced is detected by Sophos as a piece of malware called Mal/Behav-027. It’s likely that the cybercriminals behind this attack will rotate the malware being served up by this dangerous website – so we will continue to monitor its activity as well as block access to the infected webpage with our web protection solutions.