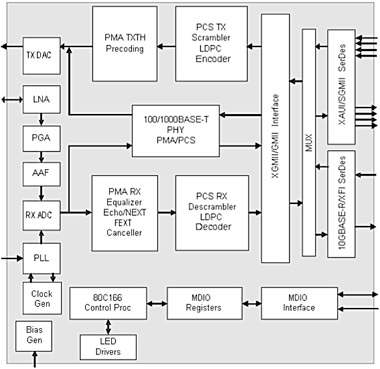 The SFT9001 is the industry’s lowest-power 65nm 10GBASE-T PHY and is the second product from Solarflare that exceeds all the IEEE 802.3an 10GBASE-T specifications. At half the power consumption of other offerings, the chip has multiple power modes including a sub 4 watt low-power mode, radically changing the game for the deployment of ubiquitous 10GbE.

Solarflare’s standards-compliant PHY supports 100-meter reach over copper Ethernet cabling and features triple-speed, auto-negotiation for 10GBASE-T, 1000BASE-T and 100BASE-TX. Leveraging the architecture of the previously-shipped SFX7001 PHY, the SFT9001 supports both new and existing copper cabling specified for deployment in building networks, including unshielded Category 5E, Category 6, Category 6A and Category 7. Due to its support for previous lower speeds of Ethernet and legacy copper cabling, 10GBASE-T enables IT managers to upgrade to 10GbE, while preserving investments in current infrastructure.

The company’s chip comes in a very small package and consumes 50 percent less power than other offerings as a result of Solarflare’s proprietary advanced noise cancellation architecture. This architecture includes patented low-power echo suppression and superior immunity to noise from cell phones, which has plagued other 10GBASE-T implementations. Other key features of the PHY include power scaling down to hundreds of milliwatts and support for Wake-on-LAN, both critical for making network equipment power efficient.

In addition, Solarflare’s PHY provides 10GBASE-T advanced cable diagnostics to help ease deployment and reduce network downtime by assessing line characteristics. With 10GBASE-T, IT managers finally have the familiar plug and play ease-of-use of RJ-45 connectivity, as well as the ability to run 10GbE on existing installed cabling, which is vital for broad market adoption.