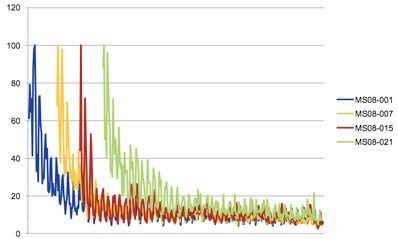 The lifespan of most, if not all vulnerabilities, is unlimited.

The Laws derived from this research are:

1. Half-Life – The half-life of critical vulnerabilities remained at 30 days across all industries. Comparing individual industries, the Service industry has the shortest half-life of 21 days, Finance ranked second with 23 days, Retail ranked third with 24 days and Manufacturing ranked last with a vulnerability half-life of 51 days.

2. Prevalence – Sixty percent of the most prevalent and critical vulnerabilities are being replaced by new vulnerabilities on an annual basis. This number has increased from the 2004 research where it was 50 percent. The top stragglers according to Laws 2.0 are MSFT Office, Windows 2003 SP2, Adobe Acrobat and Sun Java Plug-in.

3. Persistence – The Laws 2.0 declared that the lifespan of most, if not all vulnerabilities is unlimited and a large percentage of vulnerabilities are never fully fixed. This law was illustrated with data samples from MS08-001, MS08-007, MS08-015 and MS08-021.

Wolfgang Kandek, CTO of Qualys, and author of the Laws of Vulnerabilities 2.0 said:

Security is getting more difficult with attackers becoming extremely sophisticated and the window of exploitation shrinking to days for most critical vulnerabilities. Our goal with this research is to help organizations across different industries to understand the broader trends, the potential for damage and the priority of vulnerabilities, so they can make more effective and more immediate decisions to protect their networks. With research like that outlined in the Laws of Vulnerabilities 2.0, we can provide the industry with a statistical look at threat trends in real-time.

The Laws is derived from an anonymous dataset that is non traceable to any given customer, IP address or network. The data is collected through the QualysGuard scanning infrastructure that performs over 200 million IP audits annually. Simple counters are kept during scanning of customers’ networks and the collected data is then summarized and logged daily for this research analysis.