If you have been browsing the AppStore for security software, you probably know that there isn’t a large selection of utilities in this area. Some of them sound good, some our sketchy, but my aim is to try and review all of them. If you are interested, do follow Help Net Security RSS feed for new iPhone security articles.

Over the past couple of days I have been playing around Notes+. The application was produced by Japan-based SEPV Corporation. The version I tried was 1.0.4, which is currently not the latest one, as 1.0.5 was apparently released just yesterday. Besides the Chinese localization, the new version doesn’t offer any other changes so the copy I used is practically the same one.

Ever since using a few dreaded Windows Mobile powered devices, I was interested in having my “mobile notes” in a secure environment. Back then, somewhere in mid 2005, Help Net Security parent company even had a Windows Mobile application that did the trick. Now discontinued, Confidential Notes was a secure alternative to the regular Notes program on my Compaq iPaq. It worked well, but now, as an avid iPhone user I needed something similar and I came across Notes+. 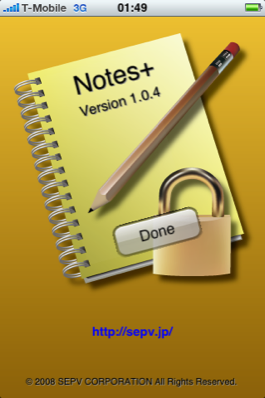 Notes+ is rather a simple utility – its main function is to be used as a note taking utility with a twist. The twist in this situation is a security lock which can be turned on or off on any saved note. 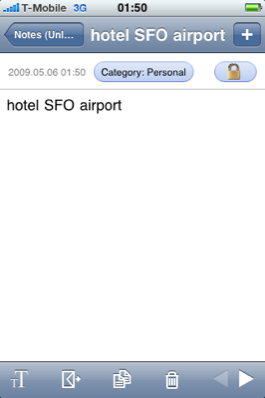 The image above shows a typical new note with two options – category and a security lock. In this situation the note was labeled as private and when someone would open my iPhone she wouldn’t see the note in question without the proper authorization. Public notes would still show, as they weren’t deliberately locked.

The font size on the above screenshot differs from the others. Notes+ provides three sizes of typed-in text, all of them easily switched via the tT icon in the lower left area of the application interface.

Categorization is definitely one of the most important functions in this field, so you will be able to easily add/edit/delete new categories. 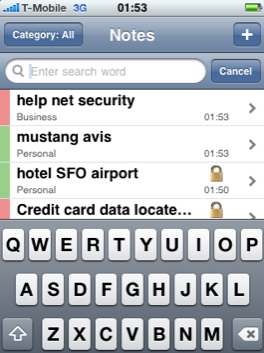 Every note you take has a default category, which is the one you used in the previously created note. This can be easily changed by clicking the category and selecting another. 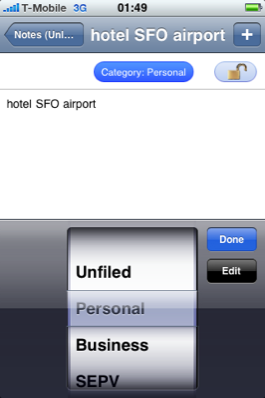 From the eye candy perspective, every category has its own color which makes it easier to organize in the main interface. Notes+ also provides rather good search capabilities.

Before wrapping things up, I would like to mention two more options: change of layout modes and export functionality.

Notes+ uses accelerometer to support both landscape and portrait modes. This is surely a nice addition for those preferring mode switching while entering large chunks of text. 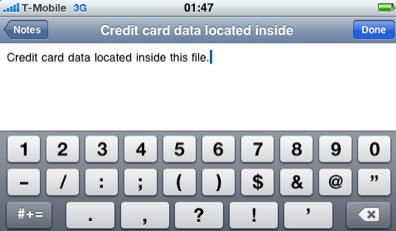 As more and more desktop applications are getting their iPhone versions, some kind of synchronization is becoming a must. Notes+ doesn’t have the ability to synchronize with anything, but you can export all of your notes in a CSV file directly over the default mail application. 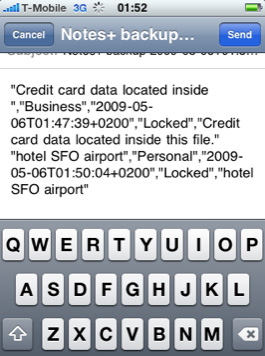 Overall I quite liked the no frills concept of Notes+ and the fact it is very simple and therefor extremely easy to use. My only suggestion would be to create a separate section for the password data (input, change and maybe even a “Forget your password?” action), as the current implementation is quite rudimental.