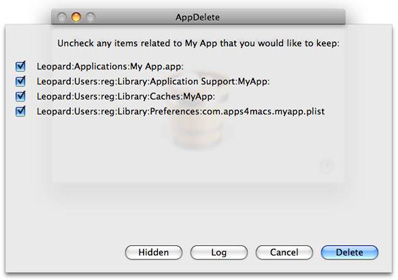 Just drag the unwanted application (or folder containing it) onto the AppDelete icon. Users can also select from the main menu, or right-click an item in the Finder using the AppDelete Automator workflow. AppDelete also works well in the Dock.

AppDelete will then search the system to find the associated items. These items will be moved inside of a folder in the Trash named AppDelete with the name of the app dragged onto the icon. The folder can be inspected at any time before emptying the trash.