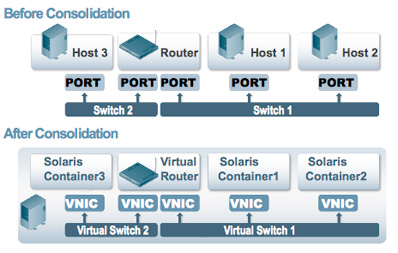 Central to the new release is the inclusion of Project Crossbow, the most significant networking technology development to Solaris in this decade. Crossbow network virtualization promotes more effective sharing of network resources and enhances the ability to consolidate server workloads.

Using the basic building block of Virtual Network Interface Controllers (VNICs), virtual switches and interconnects, Virtual LANs (VLANs), plus OpenSolaris routing and firewall functionality, it is possible to consolidate an entire distributed computing environment on a single system for prototyping, testing and even deployment scenarios.

One of the most widely deployed virtualization technologies in the world, Solaris Containers provide lightweight, agile, software-defined boundaries that can be used to create virtual servers for consolidating hundreds of existing enterprise-class workloads onto a single system.

You can get OpenSolaris here.