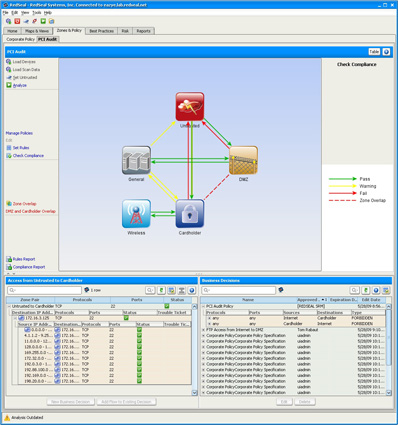 RedSeal software continuously analyzes every firewall rule and router ACL on the network to audit both individual devices and how those devices interact to deliver security to the business as a whole. It summarizes enabled and prohibited access in simple diagrams and reports. These enable security management personnel to easily spot exposures that otherwise would have gone unnoticed until exploited by a hacker.

Network Advisor 4.0 also verifies that the network enforces the security organization’s access policies, both internal and regulatory. Users can specify what access should be prohibited or allowed between security zones. RedSeal analyzes the access actually enabled on the network to verify that firewalls, routers and other devices are correctly configured. If a violation is discovered, RedSeal notifies the appropriate personnel. It then isolates the root cause of the access, identifying the exact devices, rules and ACLs that enable the risky access.

The software reduces the burden of audits for PCI DSS, NERC CIP, SOX, FISMA and other regulations. RedSeal automates control testing, decreasing the risk of a finding by auditors. RedSeal also offers reports that detail the controls and demonstrate that they are operating properly, lessening the time and cost associated with supporting each audit.