Users should be wary of links to websites that are currently circulating on the web claiming to offer naked pictures of popular US film star Ashley Greene. Cybercriminals are using the hot trending topic to spread malware that will infect both PC and Mac computer systems. 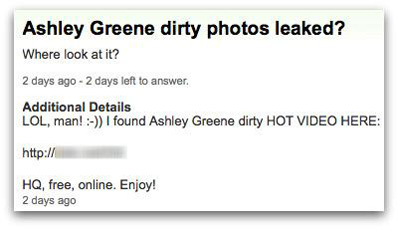 Nude photos of Ashley Greene, who plays the character Alice Cullen in the movie ‘Twilight’, were first posted on PerezHilton.com before being removed at the request of her legal team. However, in the time that they were available, internet users have been able to download copies of the pictures.

Attackers have since been using the hype around the images to post links on message boards, forums and social networks claiming to point computer users to the photos that direct to a webpage which will try to install malware.

The webpage determines if a Windows or Mac computer is accessing it and will infect either with the appropriate malicious software – ‘Mal/EncPk-JD’ for Windows computers or ‘OSX/Jahlav-C’ for Macs.

“Thousands of people will be searching Google for these pictures right now and the hackers know it,” said Graham Cluley, senior technology consultant at Sophos. “There are more and more malware attacks targeting both PC and Mac users – so whatever system you use, infection could be just a click away.”