Come this September, new Macs will ship with the Snow Leopard operating system. Apple says this version of OS X is “faster, more reliable, and easier to use,” and it probably will be for many. But how about those who find computers (even Macs) just a little bit confusing? Or users making the move from Windows to Snow Leopard? 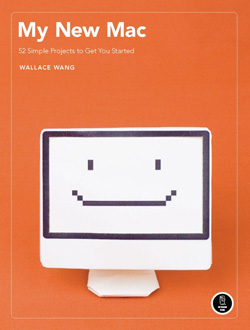 For anyone entering the brave new world of the Macintosh operating system, geek book publisher No Starch Press offers My New Mac, Snow Leopard Edition. “This is a project-based, get-it-done-without-a-lot-of-fuss guide to using a Mac—not a tedious and boring manual,” said No Starch Press Publisher Bill Pollock, “because who wants to read those anyway?”

In this completely revised and updated edition of his best-selling My New Mac, Wallace Wang walks readers through 52 useful projects that will have them doing useful things with their Mac right away. “My New Mac is a different kind of book, because the Macintosh is a different kind of computer,” explains Wang. “Instead of burdening users with technical details, the Macintosh lets them get useful stuff done right away. That’s why I designed My New Mac as a project-oriented book that focuses on accomplishing specific tasks, rather than a book that lists all of the possible menu options.”