Apple today included a pre-order of Mac OS X 10.6 Snow Leopard on the Apple Store and Amazon.com has it in stock as well. To the delight of Mac users, this proves that the rumors regarding an early release were true. If you order it from Apple today, you can expect a delivery on August 28th 2009. 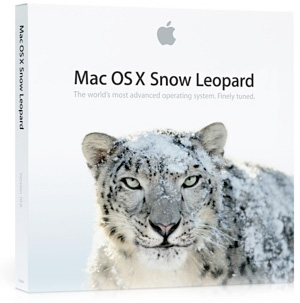 The all-new, exactly-the-same Finder. The Finder has been completely rewritten to take advantage of the new technologies in Snow Leopard, including 64-bit support and Grand Central Dispatch. It includes new features such as customizable Spotlight search options and an enhanced icon view that lets you thumb through a multipage document or watch a QuickTime movie.

Exchange support. With Snow Leopard the Mac now has out-of-the-box support for Microsoft Exchange Server 2007, something even Windows PCs don’t have. There’s no need for time-consuming installations or complicated configurations.

Faster to wake up, shut down, and join a wireless network. With Snow Leopard, your Mac wakes from sleep up to twice as quickly when you have screen locking enabled. Shutting down is up to 75 percent faster, saving precious moments when you’re trying to head home or to the airport. And joining wireless networks is up to 55 percent faster.