Online crime is constantly evolving, and fraudsters do not discriminate against any organization or person. Online attacks involving phishing, pharming and Trojans represent one of the most organized and sophisticated technological crime waves worldwide. Online criminals work day and night to steal identities, online credentials, credit card information, or any other information that they can efficiently monetize. They target organizations in all sectors, as well as any person who uses the Internet at work or at home.

These online criminals also have new tools at their disposal and are able to adapt more quickly than ever with advanced crimeware; rapidly deployed using stealth mechanisms. Their supply chains have evolved to match that of the legitimate business world, including the ability to provide what RSA coined “fraud-as-a-service”.

This month’s intelligence report from the RSA Anti-Fraud Command Center includes a highlight based on insight into the world of online fraud as well as statistics and related analysis from RSA’s phishing repositories. 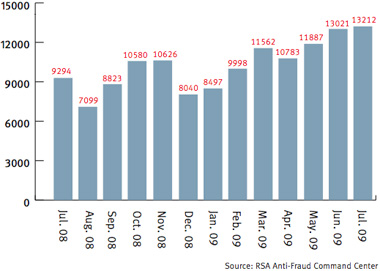 Distribution of attacks by hosting method 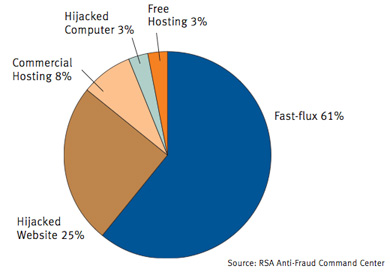 While the number of phishing attacks increased slightly through July, the number of attacked brands fell by nine percent, with ten new entities enduring their first phishing attacks. There were 104 brands that suffered less than five attacks throughout the month, a portion equivalent to 55 percent, marking a decrease from the 63 percent reported in June.

These figures signify that even though fewer brands were attacked in July, a larger portion of them suffered a higher number of attacks compared to June. These figures can also be attributed to the Rock Phish Gang, which comprise the majority of fast-flux attacks. Rock Phish is known to launch numerous targeted attacks against a small number of brands. 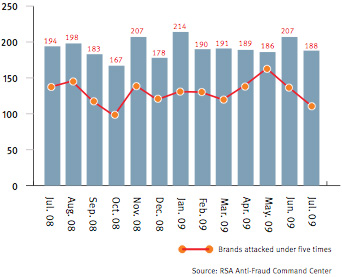