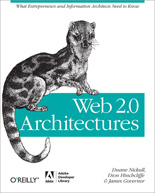 Introduction
What is Web 2.0? There is still no definitive and all-encompassing definition for the phenomenon, and there probably never will be. One thing that is known for sure is that it changed the way we interact with one another. Users have become an integral part of the Internet experience – they both “consume” and provide the content in the applications. This book sets out to explain what Web 2.0 is and what it isn’t, through the eyes of a software architect.

James Governor is co-founder of and industry analyst with RedMonk.

Dion Hinchcliff is founder and CTO for Hinchcliffe and Company, a consulting firm which specializes in Enterprise Web 2.0, SOA, WOA, and RIA strategy and execution.

Duane Nickull has been working for both the United Nations CEFACT committee and OASIS for the purposes of writing and building new architectures for global integration of multiple systems. He also works as a senior technical evangelist for Adobe.

This book has 8 chapters. The first one introduces the term and lists Web 2.0 patterns, abstracted to a generic level so that they are not dependent on specific protocols, products or technology. This is done so that later, when real-life examples are analyzed, the readers can see why a specific pattern is applicable.

The second chapter examines the Internet and its previous patterns and protocols, content and security. In a very simple and concise way, the uninitiated can learn about the basics of the “old” Internet (so called Web 1.0), and be ready to understand the differences between the two versions in chapter 3, where the authors start by showing the list (compiled by Tim O’Reilly some 4 years ago) that shows Web 1.0 examples with their 2.0 counterparts (e.g. Double Click – Google AdSense, or Britannica Online – Wikipedia), then continue with dissecting each example. Chapter 4 explains the evolution of the client/server model of the original Web into the five-tier model for Web 2.0.

It is only with chapters 5 and 6 that we enter deeper into the domain of developers and architects: reference architecture, models and patterns, problems and solutions, etc. Chapter 6 is also an introduction to the next one, because it shows in which way will the patterns in it be dissected and explained. Chapter 7 encompasses almost half of the book. This part is almost exclusively dedicated to the specialists. I do not belong to that category, so for me this was a informative read but I had some difficulties projecting the information into a mental model that would make sense. Although, the authors really helped with simplified real-world examples and by not using overly technical jargon.

The final chapter tries to offer a glimpse into the future. Since Web 2.0 is such a dynamic phenomenon, people apply its ideas in new and unexpected ways. Have you heard about Law 2.0? Or Media 2.0? I haven’t – until now.

This book was really an eye opener! I knew less then I thought, and definitely rarely considered the possible developments of Web 2.0. Since we – the users – have become an even greater factor than before in driving the Internet forward, I would recommend this book to everyone whose work or existence is considerably tied with the online world.

I would also recommend this book for the late bloomers – architects and developers that have, for whatever the reason, failed to transition to the new model. Chapter 7 is perfect for a crash-course introduction.