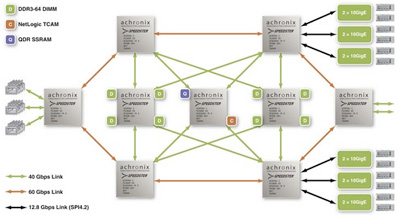 The Achronix Bridge100 platform offers two 120 Gbps bidirectional interfaces: three QSFP connectors on one side, and 12 XFP connectors on the other. All Speedster FPGA features are available, including logic, RAMs, multipliers, SerDes, programmable I/Os and the Achronix patented picoPIPE acceleration technology. The programmable logic takes the form of an array of SPD60s from the Achronix Speedster family of FPGAs —logic devices with up to 1.5GHz in fabric performance.

The Bridge100 comes loaded with eight DDR3 modules, a QDRII+ memory, and a NetLogic Search Engine (CAM). This memory is in addition to the 3.3 Mb per SPD60 (30 Mb total) embedded in the FPGA devices. These memory resources are available for packet buffering, classification, scheduling and traffic shaping, and statistics gathering.