INTERPOL‘s Secretary General Ronald K. Noble announced that the EDAPS Consortium had been chosen to design and produce the world’s largest police organization’s first-ever e-passport. The e-passport for the Heads of INTERPOL’s 187 National Central Bureaus (NCBs), Executive Committee members and staff from its General Secretariat headquarters will set new standards in document security. 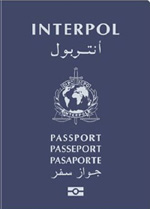 The INTERPOL chief said that the provision of a secure, globally recognised INTERPOL e-passport to the Heads of NCBs is aimed at ensuring that they can travel freely internationally in order to assist in the apprehension or transfer of fugitives.

“The introduction of the INTERPOL e-passport marks a significant step forward not only in enabling law enforcement officers to carry out their duties, but also in setting global standards for secure travel documents, especially as the use of fraudulent passports by terrorists poses the number one threat to the safety and security of citizens everywhere,” said INTERPOL Secretary General Ronald K. Noble.

The INTERPOL e-passport will incorporate security features such as laser engraving, an electronic chip, and holographic, micrographic and optical security elements.

The international suppliers supporting the INTERPOL e-passport development by EDAPS are: