Imprivata conducted a national survey targeting executives across a wide array of industries (including healthcare, financial services, state and local governments agencies) to better understand the rate of adoption of desktop virtualization and how organizations plan on securing these new environments. The survey was conducted in May/June 2009 and resulted in 132 respondents.

73 percent of respondents indicated that they are investigating or have plans to implement VDI solutions in 2009.
When asked about the reasons for the implementation, 78 percent of those who have already implemented or are thinking about implementing such a solution have cited the simplification of desktop management as one of the main reasons. Other reasons include: 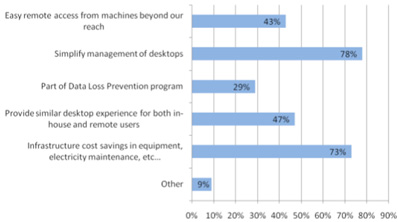 Security is likely an issue to deploying VDI environments

Despite the strong interest in deploying virtualization, companies are still struggling to figure out how to provide security in a virtualized environment. Since one of the advantages of having VDI is the ability to dynamically create desktops specific to the user’s role within the organization, having a centralized way to manage user identities, roles and access policies is critical.
Having been asked whether they have considered the methods of securing this new environment, the respondents replied: 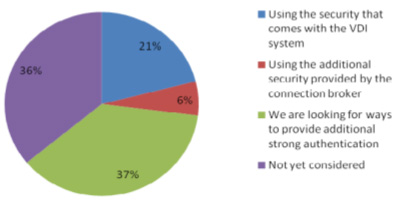 Another question was about the choice of preferred method of strong authentication, and the answers were the following (multiple choices): 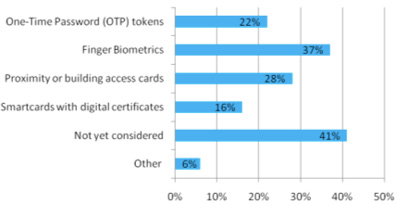 Finally, when asked about the time frame for implementing VDI solutions (for those who intend to do it), 68% responded that they plan to do it in the next 12 months.