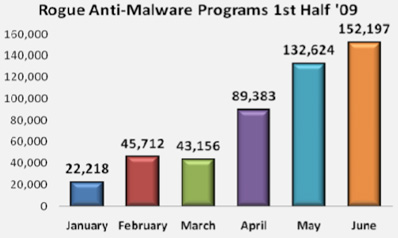 The report found that the numbers of detected rogue anti-malware programs, fake security software that actually infects computers to animate assorted electronic crimes, grew 585 percent between January and the end of June 2009.

The number of unique phishing websites detected in June rose to 49,084, the highest since April, 2007’s record of 55,643, and the second-highest recorded since APWG began reporting this measurement.

The number of hijacked brands ascended to an all-time high of 310 in March and remained, in historical context, at an elevated level to the close of the half in June.

APWG Chairman David Jevans said, “The Internet has never been more dangerous. In the first half of 2009, phishing escalated to some of the highest levels we’ve ever seen. Of even greater concern is the skyrocketing sophistication and proliferation of malicious software designed to steal online passwords and user names. New malicious software such as the Zeus trojan, exhibit a level of sophistication that would make the best software programmers envious.”

The number of unique brand-domain pairs (indicative of the general number of unique URLs that occur per domain) rose to an all time high of 21,085 in June, increasing 92 per cent from January’s reported 10,980.

With this issue of the APWG Trends Report, a new metric has been added, using data contributed by Websense, measuring proliferation of three categories of malevolent software: Crimeware (code designed to victimize financial institutions’ customers); Data Stealing and Generic Trojans (designed to send information from the infected machine, control it, and open backdoors on it); and Other (commonly auto-replicating worms, dialers for telephone charge-back scams, etc.)

According to Dan Hubbard, APWG Trends Report contributing analyst and Websense CTO, “Due to evolution of attack
sophistication, it is becoming increasingly difficult to separate and report on attacks that are specifically designed to steal customer banking information. Additionally, attacks that only look for credentials from popular social networking, web mail, and even gaming sites, can lead to attacks for banking theft and crimeware.”

Highlights of report include:

The results of the half-year report are of grave concern to the global membership of the APWG and the research centers, treaty organizations, law enforcement agencies, government agencies and industry associations with which the APWG corresponds.