According to a new PandaLabs report the major story this quarter is that attackers have broken all records when it comes to creating new threats as over the last three months five million new strains of malware have been recorded. Most of these were banker Trojans, although adware and spyware have also increased. 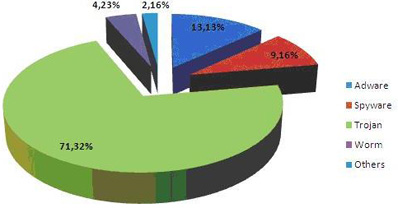 “We are currently receiving some 50,000 new examples of malware everyday, this compares to 37,000 just a few months ago. There is no reason to believe that the situation will improve in the coming months,” explains Luis Corrons, Technical Director of PandaLabs.

In terms of the number of computers infected, there has been a 15% rise compared to the previous quarter. In more than 37% of cases, the culprits were Trojans, while adware was responsible for 18.68% of all infections. This category in particular has been expanding largely due to the major proliferation of fake antivirus programs or rogueware.

This report also notes the trends analyzed over the last quarter. PandaLabs has detected a major growth in the distribution of malware through spam, social networks and search engine optimization techniques, which draw users to spoof Web pages from which malware is downloaded.

These methods for propagating malware often use social engineering, exploiting a range of current issues such as swine flu, Independence Day, forest fires or speeches of Barack Obama.