According to PC World, there’s some good and some bad news for BlackBerry users. “There is no technical way of hacking a BlackBerry”, says Sheran Gunasekera, head of R&D at ZenConsult, at this year’s Hack in the Box conference in Malaysia. 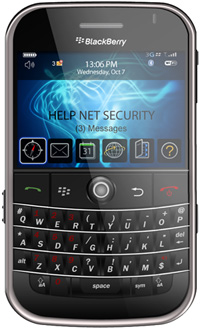 But that is no reason for BlackBerry users to become complacent. If there is no fault in the device, there could be one in you. You could be an entry point for malware introduction into the device, and then all the technical perfection won’t mean a thing.

“Beware of social engineering attacks”, says Gunasekera. Be careful when being offered free applications or cool slideshows for your device. They could be just a smokescreen to introduce a malicious software into it – software that can steal your data, intercept phone calls, or even listen to a real-world conversation or meeting.

A hacker could be reading your messages or make expensive phone calls that will be billed to you. The malicious program can be even set to take pictures in defined intervals and send them to the hacker. As you see, there are a lot of possibilities, and all of them bad.

Here is what Gunasekera advises (for BlackBerry and other smartphone users alike):

He also advises to RIM (the company that manufactures BlackBerry devices) to regulate applications designed for it, so that people can be sure that what they download is legitimate software.