Individuals are turning to P2P networks and auction sites in staggering numbers to acquire or transfer illegal software and in doing so are harming the economy whilst exposing themselves to malware, identity theft and criminal prosecution, according to a report from the Business Software Alliance. 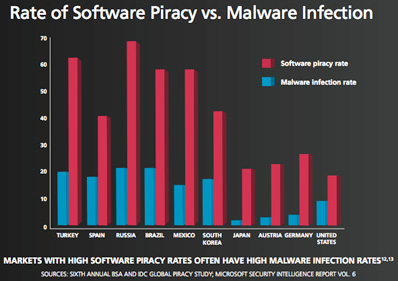 The report, entitled Software Piracy on the Internet: A Threat To Your Security, offers a peek into the scale and impact of online software piracy, including a retrospective look at the past year’s notable enforcement actions.

In particular, this year’s report zeros in on P2P networks and auction sites, both of which are a hotbed for the transfer of illegal software. As a longtime leader in the fight against software piracy, BSA monitors peer-to-peer networks and auction sites, issuing “takedown requests” when it finds suspicious software being offered. In the first half of 2009, BSA stepped up its efforts in this area and issued almost 2.4 million takedown notices related to P2P and BitTorrent file sharing, an increase of more than 200 percent over the same period in 2008.

Likewise, in the first half of 2009, BSA more than doubled its impact with its in-house Internet “crawler” requesting the removal of almost 103,000 torrent files from nine of the largest BitTorrent hosting sites worldwide. These torrent files were being used by nearly 2.9 million individuals to download software with a retail value of more than $974 million.

“Peer-to-Peer networks are ideal for distribution of a wide variety of materials that can be legally shared with large groups and are a tool used by more businesses to enhance productivity. Unfortunately, P2P technology is also a favorite channel for software pirates who see it as the perfect channel through which to distribute illegal and potentially dangerous software. One of the great disappointments of this technology, for all of its benefits, is that it is now too often seen as the domain only for pirates and malcontents who place no value on the work of software developers and designers,” commented Jenny Blank, Senior Director of Legal Affairs for the BSA.

With respect to illegal auctions, BSA issued around 19,000 takedown requests in the first half of 2009, a 4% increase on the same period a year earlier. The centerpiece of BSA’s efforts is the Online Auction Tracking System (OATS), a proprietary tool that monitors auction sites and BitTorrent networks on a continuous basis.

Beyond P2P and auction site piracy, the report also draws correlations between Internet piracy and the spread of malware such as viruses, trojans and spyware, which often exploit vulnerabilities in illegal software that does not benefit from security updates provided by manufacturers. Although the correlation is not universal, geographies with high instances of software piracy suffer from high instances of malware.

“Software piracy is a threat on multiple fronts. Pirated software can be a breeding ground for malware and can also open users up to crimes such as identity theft. Those who decide to acquire illegal software harm the economy and companies of all sizes. Moreover, those who engage in piracy open themselves up to civil and criminal prosecution” said Blank of BSA.

Among the notable cases highlighted in this year’s report is that of Tommy Rushing, recently sentenced to three years in federal prison for copyright infringement linked to four for-profit Web sites that offered pirated copies of Adobe and Macromedia software. Likewise, Timothy Dunaway was sentenced to 41 months in prison for selling counterfeit computer software through 40 different Web sites.

Outside of the US, a District Court in Taiwan sentenced two individuals to six months’ imprisonment for illegal duplication of software, while Hungarian authorities raided the country’s largest illegal software distribution company and seized approximately 250 terabytes of illegal content stored on 43 computer servers. The largest case in the world was in China, where the government shut down and convicted the leaders of tomatolei.com, a Web site offering free downloads of massive quantities of illegal software originally published by Adobe, Autodesk, Microsoft, and Symantec.

Alongside enforcement, this year’s Internet Piracy Report also highlights how BSA works proactively to educate users about the dangers of online piracy. Pirated products often fail to function properly, or worse still, they are capable of infecting users’ PCs with malware that has the potential to cause serious damage.