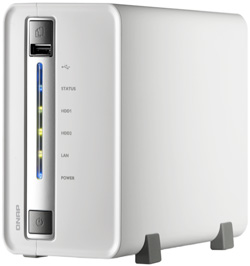 It supports up to 2 3.5″ SATA hard drives with up to 4TB of total capacity (using 2TB drives) and features a Marvell 800MHz CPU and 256MB DDRII memory. It can be configured to RAID 1 for high data redundancy, and supports also iSCSI Target service with Thin Provisioning and a Gigabit LAN port. The TS-210 is equipped 3 USB ports (1 front, 2 back panel) for expanding the storage capacity, printer sharing, or data backup to an external storage device.

The TS-210 features a built-in UPnP/ DLNA media server (with TwonkyMedia enabled) supporting a wide range of DLNA media players such as gaming consoles. By installing the DLNA/ UPnP application on your iPhone or iPod touch, users can access the TS-210 on the home network and play the videos, music, and photos from the server over the network.

In addition, the high-speed PC-less Download Station with the QGet utility enables users to manage the BT/ FTP/ HTTP download tasks remotely over the local network or the Internet. The TS-210 can perform centralized backups of all computers attached to the network.