Esther Dyson, a former chair of the Electronic Frontier Foundation and the ICANN, and a long-time successful investor in IT start-ups, addressed on Sunday the crowd gathered at the World Congress of the Information Security Forum in Vancouver with a prediction of the future evolution of information technology. 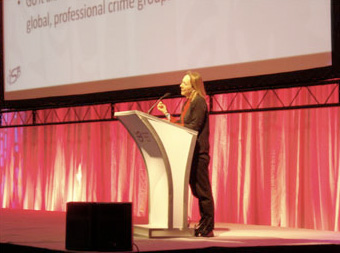 According to the eCommerce Times, her prognostication lay on the premise that current private measures regarding computer security take hold across countries and societies. If that proposition holds true, she thinks it’s likely that Microsoft and Apple will take more care to patch the vulnerabilities in their products, Google will alarm you more thoroughly if you search comes up with potentially dangerous links and that Comcast will declare war on botnets. And all of that she sees happening in this next decade.

She compared information security with healthcare: “People began to realize the cost of healthcare borne by other people. The arguments is about whether I should pay for somebody else’s bad behavior versus if I’m sick, shouldn’t society take care me? That same thing can be applied to a company’s bad behavior regarding security.” She believes that people will start shifting their perspective to prevention (in both fields).

She also thinks that laws will be made to make ISPs responsible for damages that result from their customers’ computers – as soon a US senator’s business gets hit by a DoS attack.

ISPs will start installing security software on their customer’s machines. At first, this will surely raise costs, but in the long run they will fall because there will be less money to be paid for damages and support. The last nail in the coffin for the insecure Internet will be put by the insurance companies – they will become active in reducing risks and start hiring security experts.

As regards the future of social media, she says that Twitter and Facebook are not a fad. They offer new capabilities that “allow human nature to flow in different ways” and create business opportunities that companies should learn to exploit.