The earliest public mention I could find of SQL injection (“piggybacking SQL statements’ as the author put it) was from someone who called himself Rain Forest Puppy (RFP). In 1998 RFP wrote an article for Phrack Magazine (Volume 9, Issue 54) in which he talks about “NT Web Technology Vulnerabilities’. However I suspect the vulnerability had existed long before then.

More than a decade has passed since that article, and still today Fortune 500 companies are having trouble protecting themselves against such attacks. In this article we are going to look at some high profile SQL injection attacks which hit the news this year.

As you can see from the chart below, SQL injection was the third most widespread web vulnerability in 2008, according to The Web Application Security Consortium (WASC). 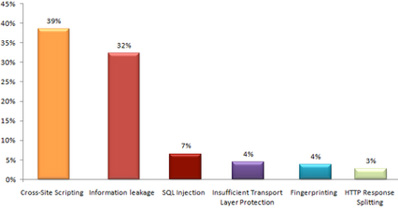 In February a group of Romanian hackers in separate incidents allegedly broke into Kaspersky, F-Secure, and Bit-Defender websites by use of SQL Injection attacks. All three companies are major brands in the security and antivirus market. All three attacks were relatively trivial to carry out, however gave the hacker known as “unu’ access to F-Secure’s virus statistics, Kaspersky’s entire database which consisted of users, activation codes, a list of bugs and Bit Defender’s thousands of user email addresses, admin login credentials and customers personal information.

The Kaspersky SQL injection attack URL would have looked something like this:
http://usa.kaspersky.com/support/home/208280433/?UniOn%20SelECT%201,concat_ws(0x3a,version(),host,user),3,4 ; --
As we can see from the above (guess-estimation) “unu’ used a mixture of upper case and lower case characters in order to circumvent any blacklist keyword filtering and he also used the concat_ws() MySQL 5.0 string function to concatenate (with a separator) his query. The above query output the MySQL version, the server hostname and the SA username.

After looking at screenshots of all three alleged security breaches, the attacks were trivial and could have been circumvented by simple input sanitation on variables which were passed to the back end database. The Romanian hacker “unu’ went on to allegedly hacking many other high profile websites such as RBS WorldPay, CNET.com, BT.com, Tiscali.co.uk, national-lottery.co.uk and others.

Ever signed up to a jobs web site in the expectation of landing that dream job and then being contacted by the site to say that all your personal information including, job applications, CV’s and covering letters have fallen into the hands of a malicious user? If so, then you must be one of Guardian Job’s half a million users who received that very email just a few weeks ago. The Guardian Jobs website uses a third party (Madgex) to store their job seekers data. Apparently the website was compromised due to a “sophisticated’ and targeted attack (SQL Injection suspected) on the 23rd of October. We would love to talk about the nitty gritty of how this attack happened however according to the Guardian “The police remain anxious to keep information about the apparent theft to a minimum”. I speculate (which one should never do) that simple input sanitation could have avoided it, yet again.

Jon Hickman a user of the Guardian Jobs website

I have read and agree to the terms & conditions