Espionage by Tao Effect is a discreet tool that integrates seamlessly with Apple’s Finder, and its main “reason of being” is to protect individual folders and applications by encrypting its contents. Its goal is to replace FileVault, the file protecting system on Mac computers that has one major flaw – only entire home directories can be encrypted (no parts of the disk, no specific folders).

Espionage creates encrypted folders by placing the contents of a folder into a disk image. The original folder is then placed in the user’s trash and in its place a new folder is created with the same name, containing the disk image, which can be accessed only by entering the right password.

The machine I used for this review is a MacBook with a 2.13 GHz Intel Core 2 Duo processor, 2 GB memory and running Mac OS X Leopard. The installation is very simple – among other things, it gives you the option of storing folder passwords in the login keychain or in a separate one. There’s also a short how to guide of which you can take a screenshot and keep it as a reminder until you familiarize yourself with the most used functions.

When starting up the program, you are immediately greeted by a request to enter the password you decided on during the installation process:

The next step is to drag the folder you want to encrypt into the window: 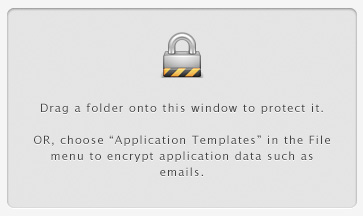 Although I don’t need it, I appreciate the helpful explanations that pepper the whole process – and I imagine novices do, too.

After you have chosen the folder, you have to decide on the type of encryption and the password that will be used for accessing it. If you are encrypting application data, you can also associate it with the specific application(s).

You’ll automatically be asked the password because Finder wants access, and after that you can change folder settings: 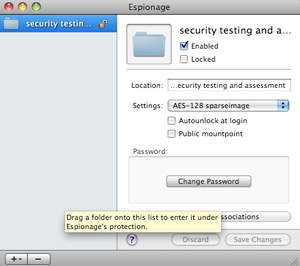 It’s easy to add as many folders as you want, just drag and drop them on the list on the left and repeat the steps. It is also very easy to reverse the whole process – just select the wanted folder and choose “Restore Folder” from the “File” menu, or simply press the “Return” key.

Well, so far the software worked flawlessly. It took the software 18 seconds to encrypt 80 Mb of data. I tried a bigger folder: 2.9 Gb in 6 minutes, 12 seconds (restores in 3m 27s). Not bad, I thought, considering there is no reason to encrypt and decrypt constantly, and that you don’t have to wait for the process to end to use your computer for other tasks. And the end result is perfect – you can access these folder only if you know the password – otherwise, the folder looks and is empty.

What I didn’t like about the process is that there is no progress bar and no estimate of the time it will take – that may not be such a big problem for a light user like me, but I can imagine heavy users being less than thrilled. Also, if you change your mind about the encryption, the process can be stopped only by exiting Espionage altogether. And after doing it, you have to start the program again and remove the folder even though the encryption was incomplete. Another thing – you cannot encrypt a folder if it contains an already encrypted folder.

Encrypting application data couldn’t be easier. Choose the “Application Templates” option from the “File” menu and you’ll be presented with the following window: 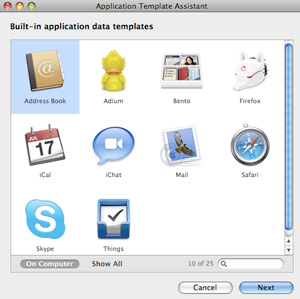 You choose the application whose data you want encrypted. For example, you want your emails to be safe: 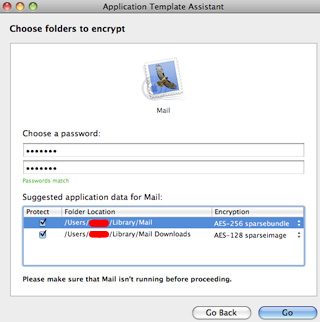 The program detects the folders and just have to choose a password for them.

I encountered some problems while restoring the folder containing Mail data:

Luckily for me, if the software is unable to restore an encrypted folder, it will try to recover by providing the disk image that contains the contents of the folder, and it will place it into the folder containing the encrypted folder. You just have to double-click this file, enter the password and the disk image containing all your files will be mounted. After that, you just have to copy-paste the contents into the original folder. I repeated the process again, with the same folder and many others – the error didn’t repeat itself.

Espionage has also the option of backing up your encrypted folders. Go to “Preferences” and open the “Backup” tab: 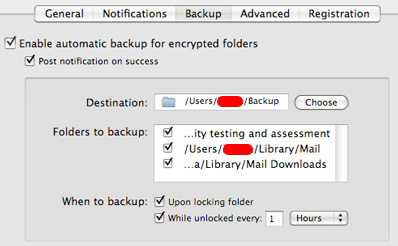 Choose the destination folder (which can also be on an external drive) and which folders will be backed up. Of course, if someone would want to see inside that folder, he would find no useful data – only this:

By the way, among the usual things you can set up in the “Preferences” window, you can also define the minimum image capacity (it’s 2048 Mb by default).

Another thing worth mentioning is that every time an application want to access any of the folders under Espionage’s protection, the software will prompt for it’s password. This can get annoying after a while, but luckily the developers though of that and inserted the option to blacklist or whitelist an application to automate the process.

Also worth mentioning is that every time you shut down your computer or log out, the encrypted folders are automatically locked and the next time you want to access it you have to enter the password again.

All in all, I am very satisfied with Espionage and I’m actually going to continue using it. I really needed a solution like this one, because there are always some things that one prefers to keep private. Apart from one very small glitch at the beginning, it continued to run very smoothly. The software is extremely easy to use and very effective – I would recommend it to all, novices and advanced users alike.