Dermott Harnett, principal analyst in Symantec‘s antispam engineering department notifies us of some unusual spam emails. Spammers – using online translators – have expanded their “operations” to reach to the 42 percent of the population of Ireland that officially speaks (or at least understands) Irish. 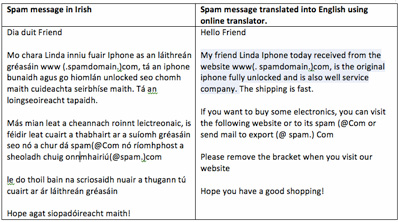 How do we know that the spam has been translated using translators? Because some sentences – when translated by someone who speaks Irish fluently – in English sound wrong, because the their whole structure is incorrect. This proves that the message was originally written in English and then translated literally.