SecuritySpy is a multi-camera video surveillance application for the Mac. It will enable you to set up a comprehensive surveillance system quickly. The motion detection feature means that you can choose to capture footage only when there is some activity to record. In addition, you can use the timelapse feature to record continuously. 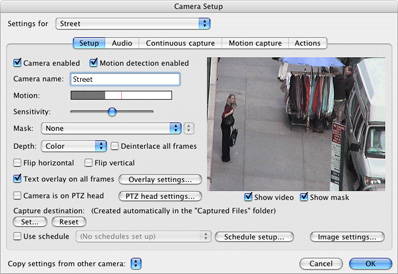 Unlike traditional analog CCTV systems, there is no need for bulky tapes to change nor for spending hours viewing the captured video. SecuritySpy also offers better image quality and much more convenient access to your captured footage.

An advantage of using SecuritySpy is the Remote Viewing feature, which allows you to access your surveillance system over the internet or over a local network using a web browser.

If you are building a video surveillance system from scratch all you need is SecuritySpy, a Mac, and one or more cameras (digital cameras, analog cameras with video input devices, or a combination of the two). If you have an existing system using analog cameras, SecuritySpy will enable you to upgrade to a computer-based digital system whilst still retaining your existing cameras and cabling.

SecuritySpy’s flexibility will allow you to set up a system tailored for your individual needs. Whether you want a single camera or many dozens, SecuritySpy is ideal, for both domestic and business purposes.