Arbor Networks, in cooperation with the Internet security operations community, has completed the fifth edition of an ongoing series of annual operational security surveys. Key findings are outlined below.

Over the last six years, service providers reported a near doubling in peak DDoS attack rates year-to-year. The figure below illustrates that peak attack rates grew from 400 Mbps in 2001 to more than 40 Gbps in 2007. This year, providers reported a peak rate of only 49 Gbps (a more modest 22 percent growth over the previous year). The slowing in DDoS flood growth likely reflects attacks reaching underlying Internet physical constraints and a migration to other more effective denial of service attack vectors. 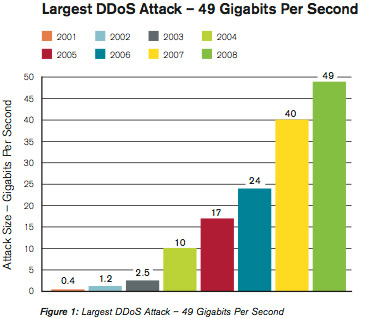 Attacks shift to the cloud

The Internet is not IPv6-ready

A majority of this year’s surveyed providers reported concerns over the security implications of IPv6 adoption and the slow rate of IPv4 to IPv6 migration. As in previous years, providers complained of missing IPv6 security features in routers, firewalls and other critical network infrastructure. Other providers worried the lack of IPv6 testing and deployment experience may lead to significant Internet-wide security vulnerabilities.

The survey by Arbor Networks covers roughly a 12-month period from 3Q 2008 through 3Q 2009, is designed to provide industry-wide data to network operators.

Operational network security issues the day-to-day aspects of security in commercial networks—are the primary focus of survey respondents. As such, the results provided in this survey more accurately represent real-world concerns than theoretical and emerging attack vectors addressed and speculated about elsewhere.