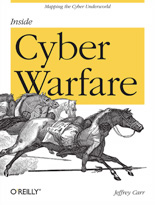 The latest attacks and intrusions on networks of US companies and the speculation about their origins have surely made cyber war a distinctly possible reality in the minds of cyber security experts, if not to the society at large. In the last few years, cyber attacks whose goals went hand in hand with the national interests of this or that country have risen in number.

This book will give you a complete and in-depth overview of the current situation in this domain and an understanding of the many variables that shape the emerging battlefield that is cyberspace.

Jeffrey Carr (Principal, GreyLogic) is a cyber intelligence expert, a columnist for Symantec’s Security Focus, and an author who specializes in the investigation of cyber attacks against governments and infrastructures by State and Non-State hackers. He is also the founder of Project Grey Goose, the open source intelligence experiment that provided the basis for this book.

The author links cyberspace as a war-fighting domain to a parallel universe – existing alongside the physical world, but able to influence it in countless ways.

What constitutes an act of cyber warfare? Are cyber espionage and cyber crime “legitimate” methods of waging a cyber war? Can a cyber attack on a state’s critical infrastructure be equaled to an physical military action with the same target?

These are the questions that everybody will be asking themselves soon, as more and more nations gain cyber warfare capabilities and begin to use them – covertly or not. Some of them don’t yet have a definitive answer, mainly because the answer must be reached by a global consensus, but this book offers the means of understanding the background on which these answers will be shaped.

Cyber war is a relatively new concept that still doesn’t have agreed-upon rules. How can the law of warfare be applied to it? So far, “attacked” countries have been less-then-eager to actively respond to the attacks, mostly because it is difficult to determine – without a shadow of a doubt – the exact culprit(s). But since cyberspace is a completely different environment than our physical world, it must follow that the rules of engagement will also differ.

A chapter in this book – written not by the author, but adapted by a Lt. Cdr. Matt Sklerov (US DoD) from his thesis – analyzes in-depth and offers logical solutions about how the Law of War should be adapted to the cyberspace environment.

The problem of non-state hackers, and the issue about assigning the blame for his actions on the state from which they operate is also addressed. So far, it seems that they are a protected asset – as long as they don’t target the resources of their homeland.

This books presents a great number of cases that illustrate the complexity of the issue. Most of the time, these attacks preceded or were executed during a military conflict between countries (Israel vs. Palestine, Russia vs. Georgia or Chechnya, etc.).

Who are the hacker teams behind these attacks? What tools do they use? How can we lay down a framework for analyzing the attacks? How can information about them be gathered? What military doctrines for cyber warfare are being developed by the “big” players? What advice can be given to policy makers from the field? All this and more you will find out in this book.

I read this book from cover-to-cover. It is immensely interesting – not to mention eminently relevant! – and should be a must-read for every cyber security and IT expert out there. Still, the clarity and simplicity of the writing and the fascinating subject should satisfy even laymen.

This book draws the curtain on a world that has, until now, been mostly in the shadows, but will be getting more attention in the future as the outcomes of “cyberspace battles” start shaping our world as surely as the “real battles” do.