Following the announced Internet censorship plans of the Australian government, which will likely include Internet filtering and the banning of some forms of pornography, the group Anonymous – made famous for its attacks and demonstrations against Scientology – has voiced a “call to arms” to all that are opposed to the proposed legislations. 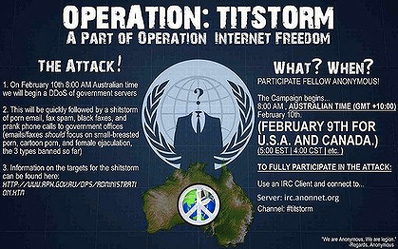 The operation was dubbed “Titstorm”, and it was comprised of a DDoS attack on government servers and a flood of calls, fax spam and emails containing pornographic content directed against government offices.

The attack was scheduled for 8 AM today on Australian time, and it started according to plan. The Sydney Morning Herald reports that the Attorney-General’s department confirmed that the Parliament of Australia website was down for a while, and that the website of the Department of Broadband, Communications and the Digital Economy was difficult to access.

According to the spokesman of the department that runs the Parliament of Australia website, the site was at one moment being bombarded by 7.5 million hits per second. It is still not clear how many sites were targeted altogether, but it seems that a wide range of government servers bore the brunt of the attack.

“No government should have the right to refuse its citizens access to information solely because they perceive it to be ‘unwanted’,” said the email sent by Anonymous to media outlets. Anti-censorship groups in Australia have condemned the illegitimate attack because they consider it ineffective and hurtful to the cause.

The aforementioned spokesman of the Department of Parliamentary Services said that even thought they knew the attack was coming, there is little that can be done about it except waiting for the storm to pass. ”Our objective has simply been to bring the site back into operation after the attack. They can’t last forever,” he said.