Cryptome, the whistleblower site that serves as a repository for “documents for publication that are prohibited by governments worldwide, in particular material on freedom of expression, privacy, cryptology, dual-use technologies, national security, intelligence, and secret governance”, has been taken down on Wednesday afternoon by its hosting provider, Network Solutions, which also had the domain “legally locked”: 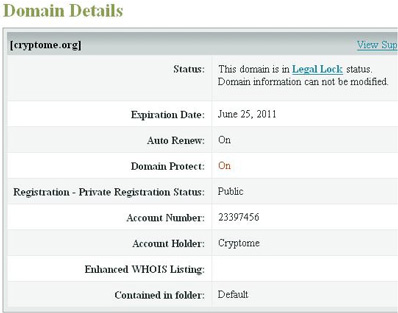 What it means is that domain information can’t be modified and the domain name transferred – only the registration can be renewed. This action from Network solutions was motivated by a Digital Millennium Copyright Act (DMCA) complaint filed by Microsoft against Cryptonome and its owners, regarding the publication of their Global Criminal Compliance Handbook, a document that reveals to users things that Microsoft would not like to become common knowledge.

In it you can find information about what records are retained and for how long, and what information can and will be given to law enforcement and intelligence agencies if requested by subpoena. Microsoft is not the only company whose “spy guide” has been published by Cryptome, but it’s apparently the one with the most clout.

ReadWriteWeb reports that once the complaint was filed and they requested of Paul Young, one of the owners of Cryptome, to take the document off the website, he refused. So the ISP intervened with a warning that said that if the document wasn’t removed by Thursday, they would disable the site. And so they did – one day before the imposed deadline.

In the complaint, Microsoft states as the reason for their request an infringement of copyright laws. The Electronic Frontier Foundation (EFF), the well-known international digital rights watchdog group, spoke up: “We find it troubling that copyright law is being invoked here. Microsoft doesn’t sell this manual. There’s no market for this work. It’s not a copyright issue. John’s copying of it is fair use. We don’t do this anywhere else in speech law.”

Cryptome has been active since 1996, and this is the first time that someone has succeeded in their mission to shut it down. Young has filed a counter-notification, and we probably won’t have to wait long for the next installment of this story. If Microsoft doesn’t forward a notice of litigation, Network Solutions will reactivate the Website and unlock the domain in no more than 14 business days. In the meantime, the website is temporarily available here.

If you want to read Microsoft’s “spy guide”, you can download it at Wikileaks, who has also offered to to host Cryptome on their multi-jurisdictional network-outside the US.