The volume of spam saw an increase of 5,5 percent, and malicious websites of a whooping 184 percent since January, says the latest MessageLabs Intelligence report.

An increase of activity of the Grum and Rustock botnets is to blame for the spam surge. Pharmaceutical spam heads the list, as per usual, followed by watches, casino and weight loss spam. Valentine day’s spam was, once again, an integral part of the botnets’ activity in February.

Another curious trend is the size of the attachments in the spam emails: 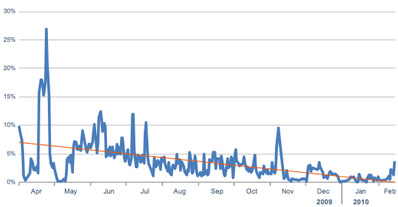 As seen, the average spam file size has been consistently dropping over the past year, making it easier for botnets to increase the volume of sent spam. One of the reasons for this is that emails contain images that are increasingly hosted online, making attachments superfluous.

The Waledac botnet, whose disruption was making news a few days ago, has seemingly performed its swan song in January, when a spike in activity and sent malware was extremely noticeable. Luckily for us, even with this surge, Waledac sent spam accounted only for 1 percent of all malware intercepted during the month.

The report finishes with a nod to Olympics-themed malware which, surprisingly, didn’t swamp inboxes but used more targeted attacks. Email with subjects like “Information and resources to help you travel during the Vancouver 2010 Winter Games” offered legitimate links but contained a hidden HTML IFRAME tag that dropped malware.

To read the report, go here.