For years now, IT experts have been predicting the advent of threats to Mac users that would mirror those faced by the Windows-using crowd. While Mac malware does exist, and the users are susceptible to social engineering attacks as much as any Windows user, there is no pressing sense of fear of what the future will bring.

A portent of things to come was the recent publication of a proof-of-concept Mac OS X blocker, accompanied by some lively debates on a number of online forums. 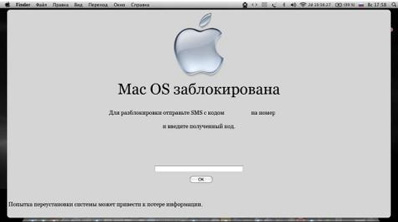 According to ZDNet, the starting point for the discussions was a post by a user who stated that his Mac OS X has been held hostage by SMS-based ransomware. Forum users’ imagination got the better of them, some GUI ideas for the software were presented, and, finally, the PoC – complete with source code – was made available.

This incarnation of the blocker just demonstrates that it is possible to obstruct the attempts to close down and exit the application, but it shouldn’t be difficult to add other features needed to make it suitable for extorting money, and only the most naive among us can believe that such a thing won’t happen.

So far, the small number of Mac users – well, small when compared to the number of Windows users – is what’s keeping them relatively safe. The moment DIY kits for designing this kind of malware become easily obtainable and usable, chances are good that the number of attacks will soar.