Korea has taken over from the US as the world’s largest producer of Internet viruses, according to analysis of internet threats in March by Network Box.

Korea now accounts for a massive 31.1 per cent of the world’s malware, a leap from February’s 8.9 per cent. This increase in Korean malware production is the result of the rise of compromised computers in Korea which are being used to send out phishing emails across the world. 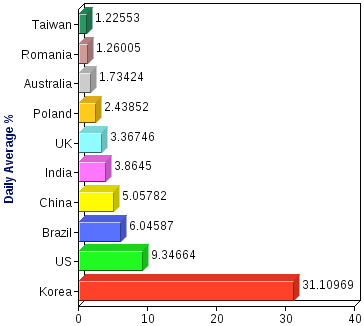 The US is the second most prolific producer of viruses, holding steady from February at 9.34 per cent. Next comes Brazil at 6.04 per cent, China at 5.05 per cent and India at 3.86 per cent.

Korea also has the dubious honor of being responsible for the greatest number of intrusions (12.46 per cent), ahead of the US at 11.94 per cent.

South Korea hit the headlines recently with the news that the personal information of 20 million people had been stolen and sold on.

Spam levels are holding more or less steady from last month, with the US producing the largest number of spam emails at 9.7 per cent (slightly up on last month’s 6.7 per cent). Next in line is India at 6.6 per cent, Brazil at 5.5 per cent and Korea at 5.0 per cent.

Simon Heron, Internet Security Analyst for Network Box says: “The increase in compromised PCs sending out phishing in Korea in March means Korea dominates the virus league table. Note, however, that we include phishing in our virus stats which some companies do not. We’ve seen Korea increasing its malware production over the last few months but March has seen a concerted effort to increase the production of phishing attacks globally.”