Facebook launched a completely redesigned Safety Center with new resources designed to inform parents, educators, teens, and members of the law enforcement community about Facebook’s tools for staying safe while using the service. 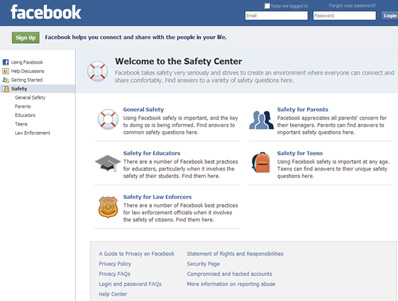 Facebook worked directly with its Safety Advisory Board on the initiative. The board provided advice on topics to address within the Center, including defense against cyberbullying; how to report a policy violation to Facebook; and information for educators on using the service. The Safety Center also includes content for parents developed by Common Sense Media, a member of its Safety Advisory Board, on topics such as “How do I teach my teen to use the Internet wisely?” and “Can I ‘friend’ my teen on Facebook?”

“There’s no single answer to making the Internet or Facebook safer,” says said Elliot Schrage, Vice-President of Global Communications and Public Policy at Facebook. “That’s why we’re introducing new tools and advice for parents, educators and teens. We want our approach for improving safety to be as simple, easy and effective as our approach to improving Facebook’s user experience.”

“Technology provides kids with new and exciting opportunities to share and communicate, but it is up to parents, educators, industry leaders, business, and policymakers to give kids clear-cut information on how to navigate both the possibilities and the perils of the digital world,” said Anne Zehren, president and COO of Common Sense Media. “We feel it’s vitally important that Facebook is stepping up to connect parents and teens around the globe with the support and education they need to make smart and responsible choices that will allow them to thrive in a world of media and technology.”

The launch of the improved Safety Center is the latest component of an aggressive global safety strategy for the company. In December, the New York Attorney General’s office brought attention to Facebook’s cooperation in identifying and disabling the accounts of registered sex offenders.

In early 2008, Facebook signed an agreement with 49 Attorneys General to help protect children from online predators. Facebook also participated in the Internet Safety Technical Task Force, a group of Internet businesses, non-profit organizations, academics, and technology experts that worked together to identify effective tools and technologies to create a safer environment on the Internet for youth.

In November, the company partnered with MTV on its “A Thin Line” campaign to prevent digital abuse and worked with the BBC to promote its “Bullyproof” campaign to end cyberbullying.