Symantec released its new security threat report which highlights key trends in cybercrime from Jan.1, 2009 to Dec. 31, 2009. In a year bookended by two very prominent cyber attacks – Conficker in the opening months of the year and Hydraq at the very end – the report reveals continued growth in both the volume and sophistication of cybercrime attacks. 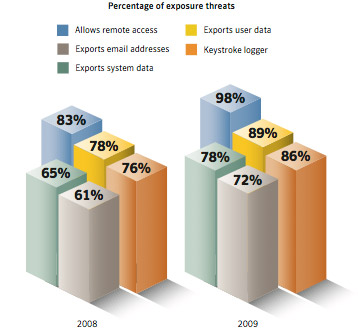 Notable trends highlighted in this year’s report include:

An increase in the number of targeted threats focused on enterprises
Given the potential for monetary gain from compromised corporate intellectual property (IP), cybercriminals have turned their attention toward enterprises. The report found that attackers are leveraging the abundance of personal information openly available on social networking sites to synthesize socially engineered attacks on key individuals within targeted companies. Hydraq gained a great deal of notoriety at the beginning of 2010, but was only the latest in a long line of such targeted attacks including Shadow Network in 2009 and Ghostnet in 2008.

Attack toolkits make cybercrime easier than ever
Cybercrime attack toolkits have lowered the bar to entry for new cybercriminals, making it easy for unskilled attackers to compromise computers and steal information. One such toolkit called Zeus (Zbot), which can be purchased for as little as $700, automates the process of creating customized malware capable of stealing personal information. Using kits like Zeus, attackers created literally millions of new malicious code variants in an effort to evade detection by security software.

Web-based attacks continued to grow unabated
Today’s attackers leverage social engineering techniques to lure unsuspecting users to malicious websites. These websites then attack the victim’s Web browser and vulnerable plug-ins normally used to view video or document files. In particular, 2009 saw dramatic growth in the number of Web-based attacks targeted at PDF viewers; this accounted for 49 percent of observed Web-based attacks. This is a sizeable increase from the 11 percent reported in 2008.

“Attackers have evolved from simple scams to highly sophisticated espionage campaigns targeting some of the world’s largest corporations and government entities,” said Stephen Trilling, senior VP, Security Technology and Response, Symantec. “The scale of these attacks and the fact that they originate from across the world, makes this a truly international problem requiring the cooperation of both the private sector and world governments.”