The misidentification of a legitimate Windows file as a virus and its subsequent deletion was what made Windows XP running computers all over the world enter in a continuous circle of rebooting on Wednesday.

The culprit? A routine software update for McAfee’s antivirus solution posted by company. The update has, since then, been replaced, but not before a massive amount of computers in companies, schools, hospitals around the world have been “infected”. The New York Times reports that the number of affected computers is unknown, but it is speculated that could run up to hundreds of thousands.

According to a statement released by McAfee, the company “is aware that a number of customers have incurred a false positive error due to incorrect malware alerts” and that “the error can result in moderate to significant performance issues on systems running Windows XP Service Pack 3.”

Although there have been reports that systems running Windows XP Service Pack 1 and 2 have also been affected, other Windows versions and – of course – systems
that don’t have McAfee’s solutions installed were spared.

Although the problems stemming from this occurrence were huge for many organizations, an interesting twist led this incident to be successfully incorporated into a disaster exercise in Iowa, during which the 911 Center went offline. As with many others before them, their first thought was: “It’s a virus.”

Another interesting thing to note is that it didn’t take long for the scammers to exploit the situation to their advantage. As Sophos reports, cybercriminals have employed their usual blackhat SEO techniques and poisoned search results regarding the topic with URLs that lead to scareware: 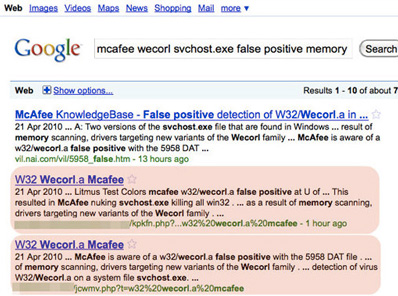 To avoid falling pray to those guys, users are advised to visit this official McAfee page for information about how to restore their computers to normal.