A deceptive “help” message invites recipients to check their PCs’ compatibility with Windows 7 by downloading and running an altered version of the Windows 7 Upgrade Advisor concealing a Trojan.

Cybercriminals are well known for their predilection to spot and bank on people’s interest in what’s hot in the e-world. Operating systems and their latest developments are classic honey pots and it is practically impossible to miss their potential as baits for illicit gains.

With Windows 7 reaching general retail availability on October 2009, it was just a matter of time before malware creators rose to the occasion, and exploited users “eagerness to install it on their PCs.

This kind of success stories cannot exclusively rely on sheer luck, so a little bit of planning is mandatory. Here’s how the plot line goes this time: a “disinterested helping hand” type of e-mail reaches Windows users’ inboxes and recommends that they download the Windows 7 Upgrade Advisor Setup. This piece of software supposedly allows them to see if their system resources could support the new OS. All they have to do is open the attached .zip file. 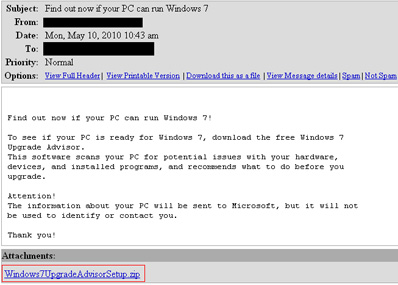 Instead of the promised compatibility checking tool, the zip file hides Trojan.Generic.3783603. This piece of malware contains malicious software which it drops and installs on the system. Frequently, it installs a backdoor which allows remote, clandestine access to the infected system. This backdoor may then be used to upload and install additional malicious or potentially unwanted software on the captured system.

The infection rates reflected by the BitDefender Real-Time Virus Reporting System indicates the beginning of a massive spreading of the Trojan. Although this phenomenon has just started, it seems that it’s just a matter of time before the cybercriminals control a huge number of systems. Infection rates are also expected to boom because of the effective social engineering ingredient of this mechanism, namely the reference to the popular Windows OS.

In order to stay safe, BitDefender recommends that you never open the attachments coming from unknown contacts and that you install and update a complete anti-malware software solution. To always stay on the safe side of things, make sure you download the software you need from the official vendor’s website.