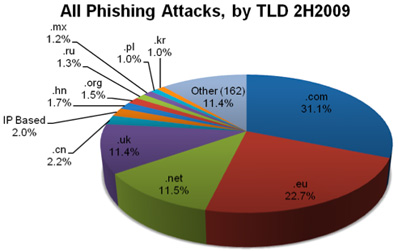 The report authors found that the Avalanche phishing gang was responsible for some 66 percent of all phishing attacks launched in 2H2009. Avalanche successfully targeted some 40 banks and online service providers, and vulnerable or non-responsive domain name registrars and registries.

“Avalanche” is the name given to the world’s most prolific phishing gang, and to the infrastructure it uses to host phishing sites. This criminal enterprise perfected a system for deploying mass-produced phishing sites, and for distributing malware that gives the gang additional capabilities for theft. 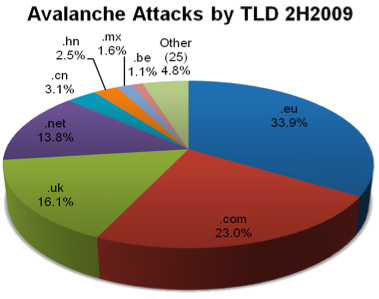 Rod Rasmussen, founder and CTO of Internet Identity and co-author of the study, said, “Avalanche’s relentless activities led to the development of some very effective counter-measures.” Rasmussen explained, “The data shows that the anti-phishing community — including the target institutions, security responders, and domain name registries and registrars — got very good at identifying and shutting down Avalanche’s attacks on a day-to-day basis. Further, a coordinated action against Avalanche’s infrastructure in November has led to an ongoing, significant reduction in attacks through April 2010.”

The new report also contains analysis of other phishing trends. Key findings and highlights include: