Does this advertisement look familiar? 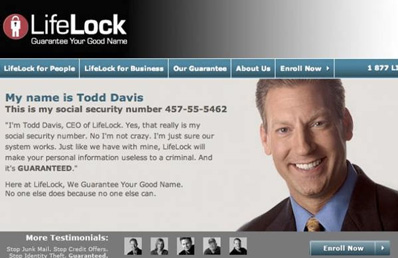 Were you one of the people who looked at it and thought to yourself: “Wow! It must really work if the guy is ready to share his social security number and name with the greater populace, without worrying that it will be misused!”?

Unfortunately for him, for the company, and for the users, Todd Davis’ identity has been stolen at least 13 times.

The founder and CEO of LifeLock, Todd Davis has long cited a story about an instance when the theft of his identity has caused him to be jailed as the moment in which he had the idea for a company like LifeLock.

According to Wired, his identity has been stolen at least 12 more times after the start of the fateful marketing campaign. Fraudsters all over the U.S. have used the information from the advertisement and opened various accounts with Verizon, AT&T/Cingular, Centerpoint Energy, Credit One Bank, Swiss Colony, etc., took the money and disappeared. Loans were also taken in his name and various collection agencies are seeking him to reimburse debts from different accounts.

Without a doubt, the marketing campaign had an unusual approach that made it a hit, but it seems that it claimed to provide a service LifeLock couldn’t deliver.

According to Phoenix New Times, the company’s main service was offering protection from identity theft to their consumers. For $10 a month, LifeLock was in charge of putting fraud alerts on the customer’s account with Equifax, Experian and TransUnion – three major U.S. credit bureaus. Since these fraud alerts get erased every 90 days, the customers are essentially paying LifeLock to do something they would probably forget to do if it was left to themselves.

The company has been involved in many lawsuits so far, and was recently ordered by the FTD to pay a fine of $12 million for deceptive advertising. The discovery of these instances of identity theft involving Davis is bound to feel like another nail in the company’s coffin.

Both Davis and LifeLock have yet to comment on this latest development.