SeaMicro emerged from stealth mode to launch the SM10000, an Internet-optimized x86-server that reduces by 75 percent the power and space used by servers. In development for three years, the SM10000 is the ultimate re-think of the volume server. 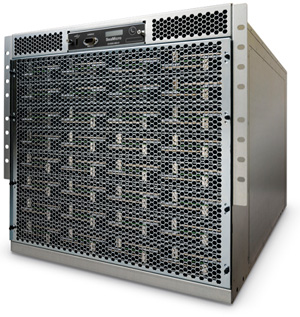 Specifically optimized for the workloads and traffic patterns of the Internet, the SM10000 integrates 512 Intel Atom processors with Ethernet switching, server management and application load-balancing to create a “plug and play” standards-based server that dramatically reduces power draw and footprint without requiring any modifications to existing software. The key benefits of the SM10000 include:

The system is built on standards-based x86 CPUs, which means it is plug and play – customers can deploy the SM10000 without modifications to existing operating systems, application software or management tools.

SeaMicro’s SM10000 system is comprised of: